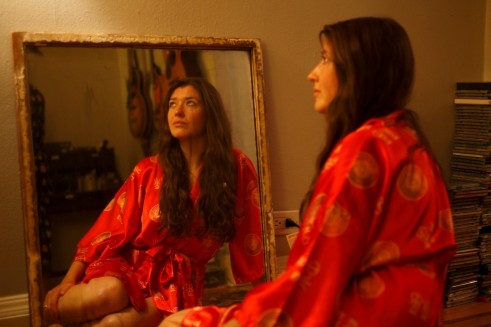 Here comes the magic.
I have known Clare since the wonderful band she is in with her husband Olivier Manchon (Clare and The Reasons) had opened for Nouvelle Vague during 2009 US tour.
If you don’t know Clare And The Reasons, please check their work – they’re super talented and graceful.
I had adapted “Burn The Witch” in a curious folky way (compared to original version), I felt it could work.
I did send the demo to Clare, who recorded an amazing solo take, plus some unexpected backing vocals on choruses.
I was amazed by these takes, they were magical.
Also “Burn The Witch” was the second song I was doing on this project, so I was super happy. All was going well.
Raphaël Chassin recorded some (excellent) drums in the studio, Vincent Taurelle played some inspired piano and that was it.
The song was simple, while sounding amazing.