“Tangled Up In Plaid”. 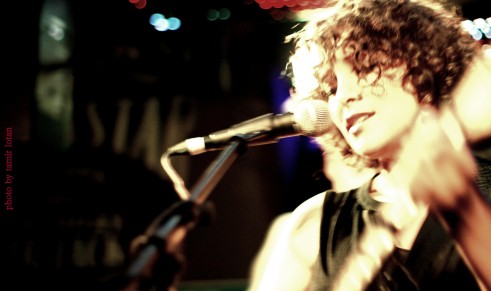 “Tangled Up In Plaid” was one of my early guitar + whistling demos (see “Medication”).
I didn’t exactly know what to do with the version but I was quite happy with the guitar parts and general direction.
I had met Gaby Moreno when she had opened for Nouvelle Vague, a few years ago.
I contacted her about the project, she instantly said ok.
FYI : The great thing with Queens Of The Stone Age is that everybody loves them – which clearly helps if you are doing a project like mine !
I did a quick demo on my computer thinking “I will improve on this later”.
Gaby recorded her excellent vocals in LA then sent me the takes.
Then something happened : Gaby’s vocals were fantastic, but my demo – despite many attempts to improve it – was not.
For ONE YEAR, I couldn’t complete this one and I felt sorry for Gaby, because I was not sure the song would end up on the album.
Finally, after months and months of various attempts, I decided to record a TR909 pattern as basic drum track, I asked Raphaël Chassin to play around it, then Julien Decoret to play the bass, Mathieu Coupat to add in some good keys and, at last, the song was THERE.
Phewww…Thank you Lord.